When a book club member proposed that we have a theme for the 2009-10 reading year, and that the theme should be Love, I was dubious. But we went with the plan. The History of Love, by Nicole Krauss, was my proposal for our January read. It’s about loss, perhaps, more than love. Or maybe it’s about the need for love. 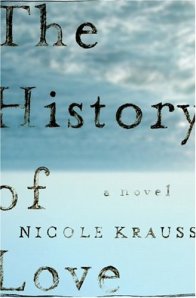 Like everyone else in the book club, I found the story confusing. In fact, I had to read it twice. But it’s a remarkable book. It’s hard to believe the author is so young: Krauss was 31 when it was published in 2005.

The History of Love is two separate stories that eventually intersect. Leo Gursky was born in the 1920s in Slonim, “the town where I lived which was sometimes Poland and sometimes Russia.” As a young man, he has a love affair with Alma Mereminski but the threat of German invasion looms and she leaves for America before him. He loses his family in one of the many mass murders of Jews but he escapes and also makes his way to America. He finds Alma eventually, but only after she has given up hope of his survival. She has married and now has two children, but the first child, Isaac, is Leo’s son.

Leo never falls in love with anyone else. He makes his living as a locksmith and he is aware of his son’s life from a distance. He knows that his son has become a successful writer.

But Leo is also a writer. He has written a manuscript — an odd, charming, whimsical book, purporting to describe the history of love:

The Age of Silence

The first language humans had were gestures. There was nothing primitive about this language that flowed from people’s hands, nothing we say now that could not be said in the endless array of movements possible with the fine bones of the fingers and wrists. The gestures were complex and subtle, involving a delicacy of motion that has since been lost completely …

Aside from one exception, almost no record exists of this first language. The exception, on which all knowledge of the subject is based, is a collection of seventy-nine fossil gestures, prints of human hands frozen in midsentence and housed in a small museum in Buenos Aires. One holds the gesture for Sometimes when the rain, another for After all these years, another for Was I wrong to love you?

But the manuscript of the book is lost, along with so much else in his life.

Now, as an old man, Leo is aware that his days are limited. He tries to make the world see him. He makes odd requests in stores; he deliberately drops change on the ground and gets awkwardly down to pick it up; he models for an art class.

Alma Singer is a young girl with a brother, Emanuel Chaim, known as Bird. Their father died when Alma was seven and Alma thinks her mother, Charlotte, needs to remarry, but this doesn’t seem likely to happen, in spite of Alma’s assistance. “The fact that she stayed home all day in her pajamas translating books by mostly dead people didn’t seem to help matters much.”

Alma knows she is on to something when Charlotte receives a letter from Jacob Marcus, asking her to translate The History of Love from Spanish into English. Jacob mentions that long ago his mother read to him from the book. First of all, Alma intercepts her mother’s communications with Jacob in an attempt to create a romance between them. But eventually she recognizes that is not going to happen and instead dedicates herself to the task of tracking down the mystery of the book.

Chapters alternate mainly between the lives of Leo and the young Alma, but we also get to look into the lives of Bird and of Leo’s old friend Zvi Litvinoff. We find out that Leo gave the manuscript to Zvi for safe keeping and that, believing Leo to be dead, Zvi published The History of Love under his own name.

The plot complexities that allow Leo and Alma to meet really need to be laid out visually as it would take too many words to describe them. But if you can suspend your need to know exactly what happens when and just immerse yourself in the flow of words and images, it is a lovely and haunting book.

The Age of String

So many words get lost. They leave the mouth and lose their courage, wandering aimlessly until they are swept into the gutter like dead leaves. On rainy days you can hear their chorus rushing past: IwasabeautifulgirlPleasedon’tgoItoobelievemybodyismadeofglass
I’veneverlovedanyoneIthinkofmyselfasfunnyForgive me …

February, by Lisa Moore, is also about loss and the memory of love. It is fiction based on an historic event: the tragic sinking of the oil rig Ocean Ranger and the loss of all 84 men on board.

Moore’s greatest accomplishment in this book is the very human voice of Helen. A no-nonsense woman, Helen is competent, exhausted, loving, angry. When her husband, Cal, is killed, she is left to bring up four children on her own. Helen’s memories of Cal and her obsessive need to know what happened on the oil rig are interspersed with her stream-of-consciousness reliving of moments in the lives of her children growing up and with her present day worries about her son John, who has unintentionally fathered a child.

In the early days after Cal died, Helen is frozen in her grief but she goes on:

You see your life but it’s as though you are behind a glass partition and the sparks fly up and you cannot feel them.

You know it’s your life, because people behave as though it is. They call you by your name. Helen, come shopping. Helen, there’s a party.

There are bills. You wake in the middle of the night because you hear water and there is a leak in the kitchen roof. The plaster has cracked open and water is tapping on the tiles, faster and faster.

She brings up the children as best she can:

Elbows, Helen said at supper. Not on your sleeve. Use your napkin. Do you want to crack the legs off that chair? How many times do I have to tell you? Don’t lean back. Don’t bounce the ball off the walls.

She would not have the TV on during supper. She had an idea of what a family was and she would make them be one. Turn off that TV, she said. If she had a quarter for every time she said, Close that door; we’re not heating the street.

She gets through the worst times, and the children grow up and life goes on.  But memories of her life with Cal are always there:

What comes over Helen when she’s tired is a kind of fog. A day at the beach after a long drive. How the yellow grass caught the light and the edges of the blades gleamed like steel. The end of a season. A haze hanging over the breakers. A whiff of something dead, there and not there, in  the breeze. The foam rolling out, tinted yellow, thick as whipped cream. The jeans Cal wore.

We were young, Helen thinks. The clear, cold ocean roiling up and dragging back, encircling Cal’s bare ankles like chains. And he bent and dipped his hand and put his fingers in his mouth.

February ends on a hopeful note, as Helen’s life is renewed and John takes on the responsibility of unexpected fatherhood, as Cal did before him.

Lisa Moore has a wonderful ear for the rhythms of Newfoundland speech and the patterns of Newfoundland life. She understands what people eat, what they think about when they are daydreaming, how families live together, and how people live with love and loss.