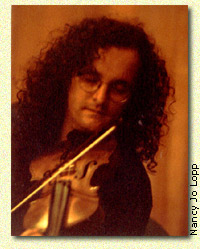 Martin Hayes is one of those quiet, funny, self-deprecating people who don’t look as though they can hold a room spellbound. He travelled from Connecticut to Vancouver to play a three-hour concert on Wednesday night, along with his long-time collaborator Dennis Cahill, at St. James’ Hall, a local community centre. And then he held the audience spellbound.

There is something about this advanced level of Irish fiddle playing that unites the room. He begins one of those sweet, lilting, toe tapping pieces. He speeds up. You start to hold your breath. By the end of the piece, he is playing at a speed that has everyone’s heart beating in unison, everyone gazing in fascination at the right foot that is tapping at four times the speed of the left,  everyone looking at that blurred point where the bow meets the strings and brings forth a sound of poignant purity.

Hayes says he always returns to G Minor, as it has the right tone: “melancholy, though not downright depressing.” Whatever key the music was played in, it resonated with his listeners. He played medleys that included reels and jigs I have never heard of but that spoke to my emotional core as well as my desire to get up and dance.

I am one-eighth Irish. Leaving the hall on Wednesday night, I was 100% Irish. Or maybe, as Hayes says, “In its purest form, Irish traditional music speaks a universal language.”

2 thoughts on “The melancholy sweetness of G Minor”