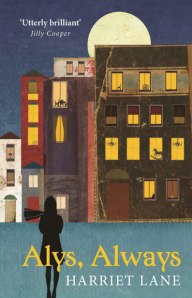 Alys, Always, by Harriet Lane. What a find! Harriet Lane is a superb writer. Reviews have likened her to Ruth Rendell, but I find that a bit misleading. Although Lane has the psychological insights of Ruth Rendell (when she is writing as Barbara Vine), this novel is not a mystery. It is a spellbinding story about a character, Frances, who initially seems very ordinary but who develops in some surprising ways. Frances starts out as an unreliable narrator, but as we get to know and understand her we can see which way things might go.

When the novel opens, Frances is driving. I was pulled right in by the atmosphere conjured up on the first page:

It’s shortly after six o’clock on a Sunday evening. I’m sure of the time because I’ve just listened to the headlines on the radio.

Sleet spatters the windscreen. I’m driving through low countryside, following the occasional fingerpost toward the A road and London. My headlights rake the drizzle, passing their silver glow over gates and barns and hedgerows, the ‘closed’ signs hung in village shop windows, the blank muffled look of houses cloistered against the winder evening. Very few cars are out. Everyone is at home, watching TV, making supper, doing the last bits of homework before school tomorrow.

I’ve taken the right fork out of Imberly, past the white rectory with the stile. The road opens up briefly between wide exposed fields before it enters the forest. In summer, I always like this part of the drive: the sudden, almost aquatic chill of the green tunnel, the sense of shade and stillness. It makes me think of Milton’s water nymph, combing her hair beneath the glassy cool translucent wave. But at this time of year, at this time of day, it’s just another sort of darkness. Tree trunks flash by monotonously.

Frances glimpses a light off to the side and is first on the scene of an accident. She does the right thing, staying by the injured woman’s side until emergency services arrive.

Later we discover that the accident was fatal. The dead woman is Alys Kyte, wife of Laurence Kyte, an author. Frances is on the lowest career rung at a publishing house, so when she hears about this her interest is piqued. The family asks to meet her to help them come to terms with the tragedy. And so the die is cast.

No one has asked me how long I’m planning to stay.

I’ve taken possession of this room. My clothes are lying in modest piles in the chest of drawers, on top of crackly sheets of ancient wrapping paper; or hanging in the wardrobe, suspended between cedar balls and lavender bags from which all scent has long since departed. I know the names of the books — their old covers bleached to palest greens or pinks by the endless cycle of summers — lined up on the shelf. I know that in the mornings the sun lies across the bed in a big gold slice. I know there’s a chip in the Blue Italian ewer that stands in its matching basin upon the windowsill, and if you angle it just so, no-one would ever notice.

In the mornings, I lie in bed and listen to the quietness outside: birdsong, wind easing through long grass.

I’m always the first to get up. I like the sensation of being alone downstairs, wandering through empty rooms while everyone else sleeps on.  In the mornings, I pass through the house and make it mine, pulling curtains, straightening cushions, collecting glasses, unlocking the doors onto the terrace and stepping outside with a cup of tea.

There is a subtle sense of unease below the surface as Frances edges her way into the lives of the Kytes.

The writing is a delight. I am hoping for lots more from Harriet Lane.

Searching for Sugar Man. I first heard about this documentary on the (highly recommended) 23 Thorns blog in February of this year. Somehow I missed hearing about the movie when it was released in 2012, even though it won many awards. But — no problem, because you can now get the DVD through the library.

What a story! A blue collar worker in Detroit made two albums back in the seventies. While critically acclaimed by a number of music lovers, they sank without trace in the wider market. He experienced some success in Australia but not enough to alter the course of his life. Jesus/Sixto Rodriguez went back to working construction and along the way raised a family.

In the meantime, the albums became best sellers in South Africa. They sold at least half a million legal copies and of course there were many more illegal copies passed around. Rodriguez was a legend. But nobody ever went looking for him because it was believed that he had killed himself at the end of a concert in the U.S.

In the late nineties, some South African fans found Rodriguez and convinced him to return for some sold-out concerts. And then came the movie.

His voice is memorable and unmistakable. Here is Sugar Man.

I am on a quest to find the perfect yam fries.

Well, perhaps “quest” is putting it a bit strongly. Really, I am just interested in consuming enormous quantities of delicious yam fries.

These are the latest to achieve my award of excellence. They are served at the Black Bear neighbourhood pub in Lynn Valley, North Vancouver. They are soft inside and crunchy outside and come pre-seasoned with plenty of salt and pepper. The chipotle mayo is perfect.

Also receiving the award this month: the comparable yam fries at Havana Restaurant on Commercial Drive in Vancouver.