Life After Life, by Kate Atkinson. Atkinson has once more gone off in a different direction with this novel. What a talented writer she is.

In Life After Life, Ursula experiences many variations on a life, as the clock continually gets reset. Think of the countless times in every life where a chance occurrence or a choice—even the tiny choices like turning left or right, leaving on schedule or five minutes later—may have enormous consequences. Ursula is born in 1910 and dies at birth—or maybe the doctor gets there in time and she doesn’t die. She moves to Germany and marries a German in the mid-thirties, or perhaps not. She marries a man in England who seems protective of her, or perhaps she has a premonition that he is not as nice as he seems. Tragedy strikes many times. By living her life over again, Ursula avoids many of these tragedies. But she can’t avoid all of them forever.

Through Ursula’s eyes, we see historical events and changing social attitudes as the twentieth century unwinds. This gives Atkinson the chance to describe characters with her usual light touch: a few words of description, a little dialogue, and we have a whole person before us.

It’s hard to pick a favourite section. The scenes of the London Blitz bring home with stunning force the real horror of that time—but those awful experiences are interspersed with the somewhat comic, somewhat boring routine that any stage of life may become:

Her fellow wardens were a mixed bunch. Miss Woolf, a retired hospital matron, was the senior warden. Thin and straight as a poker, her iron-grey hair in a neat bun, she came with a natural authority. Then there was her deputy, the aforesaid Mr Durkin, Mr Simms, who worked for the Ministry of Supply, and Mr Palmer, who was a bank manager. The latter two men had fought in the last war and were too old for this one (Mr Durkin had been ‘medically exempt,’ he said defensively.) Then there was Mr Armitage who was an opera singer and as there were no operas to sing in any more he kept them entertained with his renditions of ‘La donna é mobile’ and ‘Largo al factotum.’ ‘Just the popular arias,’ he confided to Ursula. ‘Most people don’t like anything challenging.’

They were all part-time volunteers, apart from Miss Woolf, who was paid and full-time and took her duties very seriously. She subjected them to rigorous drills and made sure they did their training—in anti-gas procedures, in extinguishing incendiaries, how to enter burning buildings, load stretchers, make splints, bandage limbs. She questioned them on the contents of the manuals that she made them read and she was very keen on them learning to label bodies, both alive and dead, so that they could be sent off like parcels to the hospital or the mortuary with all the correct information attached. They had done several exercises out in the open where they had acted out a mock raid. (‘Play-acting,’ Mr Bullock scoffed, failing to get into the spirit of things. Ursula played a casualty twice, once having to feign a broken leg and on another occasion complete unconsciousness. Another time she had been on the ‘other side’ and as a warden had had to deal with Mr Armitage simulating someone in hysterical shock. She supposed it was his experience on stage that enabled him to give such an unnervingly authentic performance. It was quite hard to persuade him out of character at the end of the exercise.

It’s one of Atkinson’s many gifts that she can create these stolid everyday characters and this ordinary situation, can introduce tragedy into it, and can then rewind the tape and go off in another direction—and it never palls. You immediately become immersed in the alternative life.  I didn’t want the book to end. 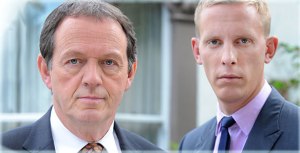 After a suitable period of mourning for Inspector Morse and an initial feeling that Lewis alone couldn’t hold my interest, I capitulated and so am now catching up on the Inspector Lewis series. I watch the episodes out of order (which generally doesn’t seem to matter). Just seen: Dark Matter, the third episode of Season III.

With the departure of Morse, Lewis (Kevin Whateley) has developed some more depth as a character but the best part of the series is the interplay between Lewis and Inspector Hathaway (Laurence Fox). This time, it’s the junior partner, Hathaway, who brings the combination of erudition, social niceties, and inner melancholy that was formerly Morse’s role. Lewis is the no-nonsense, working-class policeman who doesn’t have much time to spend on poetry, philosophy, or people’s psychological complexity. But just maybe there is more to him than meets the eye. He has certainly developed an interest in some classical music, perhaps in part due to his romantic interest in the clarinet-playing pathologist, Dr. Laura Hobson.

Dark Matter has the usual overly complex plot that has to be wrapped up within 90 minutes. There is a murder, the victim being the Master of Gresham College at Oxford University. There is a discipline—astronomy this time, affairs, blackmail, dons and students behaving suspiciously—all the usual mix. I enjoy the atmosphere and am quite prepared to ignore any holes in the plot.

Barbecued tuna at Osaka Sushi in Deep Cove. It could be a delicious start to dinner or it could be dinner all by itself. The only thing that can make it better is to drink both hot sake and cold beer with it.