Alan Hollinghurst is a very fine writer (The Folding Star, The Line of Beauty) and The Stranger’s Child is no exception.

The novel is in four sections: the events concerning two families in 1913, 1926, 1967, and 1980. The central character is Cecil Valance, a bisexual poet who dashes off a poem called Two Acres for Daphne, the sister of his lover, George, while staying at their family home in 1913. The poem outlives Valance and takes on a life of its own.

Hollinghurst’s use of language is masterful. The simplest paragraph is a delight. A review by James Wood in the New Yorker takes issue with some of the writing — he describes Hollinghurst as having Jamesian tendencies and perhaps taking the easy way out sometimes. I see a little of that but Hollinghurst’s prose seems to me to work for the periods he is writing about. And mostly it is transparent, with every page containing a word or phrase that is breath-catching in its absolute rightness:

It was the letters to George, hidden at once, destroyed for all the rest of the family knew, mentioned only breezily — ‘Cess sends his love!’: they had turned out to be the unimagined and yet vaguely dreaded thing. There they had lain, in his room, all the time that George was away in the army — ‘intelligence’, planning, other matters she couldn’t be told about. Those endless summer evenings at ‘Two Acres’, just her and Daphne — she would drift through the boys’ rooms, take down their old school-books, fold and brush their unused clothes, tidy the drawers of the little bureau beside George’s bed, all the childish clutter, the batched-up postcards, the letters … without even touching them now, her mind saw certain phrases, saw them twisting dense and snakelike in the heart of the bundle. 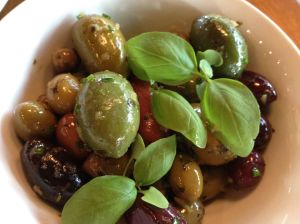 Jack Goes Boating. Philip Seymour Hoffmann both directs and stars in this unconventional love story. He is a socially awkward limousine driver. Connie (Amy Ryan) is a shy woman who works in a funeral home and whose first date conversation is, let’s say, unusual. Their relationship proceeds slowly. If he is to take her boating, Jack must learn to swim so his friend Clyde gives him lessons. Clyde’s relationship with his girlfriend Lucy is deteriorating, as Jack’s relationship with Connie slowly gains some ground.