Love Anthony, by Lisa Genova. Genova is the author of Still Alice, a book about a woman developing Alzheimer’s disease and Left Neglected, about a woman with a brain injury.

Love Anthony takes on autism. I think it’s an extremely successful novel in its own right, in addition to shedding light on an often misunderstood medical  condition (which seems to be Genova’s chosen niche). Alternating chapters tell the stories of Olivia and Beth and then we also get chapters from the point of view of Anthony, Olivia’s son. As far as I with my limited knowledge of autism can tell, Anthony is a realistic creation. The chapters from his point of view describe the behaviour that we observe in autistic people and Genova makes some well-educated guesses at how the mind behind the behaviour works. For Anthony, order and calm are critically important. The clash between his world and the well-meaning attempts from people outside it to connect with him are poignant. But Olivia and Beth are also rounded characters with lives that intersect with Anthony’s in different ways.

Take This Waltz, directed by Sarah Polley—her second directing stint after Away From Her.

The story is based on a far from unusual situation: Margot (Michelle Williams) and Lou (Seth Rogen) have been married five years and she becomes attracted to Daniel (Luke Kirby), an artist neighbour. The film transcends the simple plot because the characters are offbeat and the situations are quirky.

Michelle Williams gives a great performance as a woman who is happy and comfortable in her relationship with Lou but is sometimes aware that something is missing in her life, a common enough situation. Then she is blindsided by a sudden, uncontrollable passion for Daniel. We in the audience watch as she struggles with her mixed emotions. We know she is eventually going to succumb, and we know it’s not going to end well.

The music works well. Leonard Cohen’s Closing Time is perfect as a background to the big, noisy, family party. You will not get The Buggles’ Video Killed the Radio Star out of your head for a long time. And Leonard Cohen’s Take This Waltz provides the melancholy, dreamy feel that is ideal for the montage in Daniel’s apartment, whether the scenes are intended as things that actually happen or as Margot’s anticipation of the life she will live.

I never understood the movie’s colour palette: saturated red, yellow and turquoise, but it and the old-style houses of Toronto’s Little Portugal district create a retro feel. 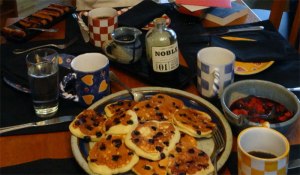 Blueberry pancakes for Mothers’ Day. Served, as is traditional in our household, with sausages, maple syrup, whipped cream, and fruit. This year, bourbon-infused maple syrup was also an option.