The Secret Scripture by Sebastian Barry

This is a sad story, redeemed by the humanity of its two central characters. It is set in Ireland and spans the twentieth century. Roseanne, at the age of 100, is a long-time resident in Roscommon Regional Mental Hospital. She decides to write down the story of her life and hide the manuscript under a floorboard in her room. (Given her age, you have to suspend some disbelief regarding her ability to move fast enough to hide the papers when someone comes to the door.)

At the same time, Dr. Grene, the senior psychiatrist at the hospital, is required to report on the condition of all his patients in preparation for the demolition of the hospital and the move of the residents to a smaller facility. Since there are too many for the new place, he must choose those who should be moved and those who should be returned to the community. He suspects that Roseanne was institutionalized for social and political reasons rather than medical ones and this appears to be the case. However, the reader sees that Roseanne’s account differs from his in some significant ways and it isn’t clear whose version is closer to the objective truth.

Coincidence again plays a role, which for me is the weakest point of the book. However, the story is powerful and tragic and the writing is beautiful. Catholic church doctrines and social mores combine to condemn Roseanne to the life of an outcast. Her marriage is annulled through the machinations of her mother-in-law. She later has a child, who disappears immediately after birth. She is abused for years in the first institution she is sent to. It is somehow bearable to read because Roseanne has survived with her inmost self intact and because someone still cares about her.

What They Wanted by Donna Morrissey

Even if you haven’t read Sylvanus Now, Morrissey’s previous book, you can read What They Wanted with no sense of missing out. Immediately, you are immersed in the harsh life of a remote Newfoundland community and the intensity of family relationships. The central figure is Sylvie, Sylvanus’ and Addie’s daughter. The story is poignant and uncompromising. Economic realities dictate that Chris, Sylvie’s younger brother, goes to work on an Alberta oil rig. Sylvie puts her own life on hold to be there with him.

Landscape, both natural and man-made, is the star of this book. You can feel the stark cold of the eastern province:

The white of the ice-chinked bay glimpsed through breaches in the trees, the coldness of its breath already on my face. The road veered to the left and then the bay opened wide before me, miles of pan ice glaring white beneath the sun and so tightly pummeled into the basin that it buckled upwards, forming ridges some ten, twenty feet high in some places. Hummocks they called these ridges, and scattered amongst them were the loftier heights of trapped icebergs, their wind-polished peaks sparkling like opals.

And you feel how the relentless ugliness of the oil rig affects the men:

I saw how, as Ben said, the unrelenting roar of the wenches, the pumps, the screaming jimmies created an atmosphere of isolation around each man, keeping them from sharing a joke, a thought, or a comment, setting each man off to himself, prowling restlessly about his small corner. I could see how silly encounters or exchanges from the day before would get too much gnawing time … I watched them cringe before Push as he thrashed about, out-yelling the jimmies in his constant calls for their diligence in the working of the rig. All this for twelve hours straight, twelve days straight, being hailed, broiled, or rained upon beneath merciless skies, constantly dodging moving hunks of metal and iron and chain — I started understanding the men’s glum faces and frayed nerves.

Morrissey’s books are well worth reading for the compelling picture of place and way of life and the power of her writing. 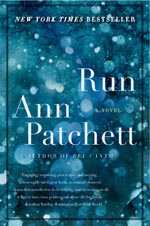 At this point, you definitely need something lighter: maybe a contemporary fairy tale.

Run is an enjoyable book by an excellent writer. If you’ve read the award-winning Bel Canto, you won’t need much persuading. Like Bel Canto, Run has a well-paced movement to its plot and it has complex, intriguing characters. Unlike Bel Canto, most of Run takes place over 24 hours.

Themes of politics, race, and family relationships are threaded throughout. There is a legend about a statue of the Virgin Mary. The story balances some of the harsher realities of life with the inevitable progression of the Cinderella figure from have-not to have. There is realism and quirkiness, though maybe not quite enough to combat the contrived aspects: the story relies on coincidence, and a significant missing element is filled in by a convenient visit from a ghost to Tennessee Moser in her hospital bed.

Doyle is the retired (white) politician who has adopted two (black) boys, neither of whom is interested in following in his footsteps despite his grooming them for political life and calling them Tip and Teddy. Kenya is the young girl who bursts into their lives and fills the void left by the death of Doyle’s wife, Bernadette. She is a world class runner. Sullivan, who is exiled after making a devastating mistake, is the birth child of Doyle and Bernadette.

It didn’t quite hang together for me in spite of the excellent writing on every page: perhaps it was over-plotted, with enough twists and side stories for at least two books.

Run will inevitably be made into a movie.