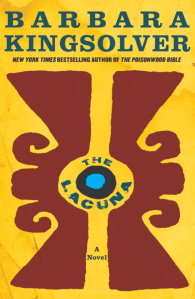 Listened to Barbara Kingsolver’s The Lacuna, read by the author. I didn’t notice who the reader was at first, but I noticed how careful she was to enunciate clearly — almost too carefully, as if English were not her first language. But by the end of the first disk I had adjusted to the slow pace and careful pronunciation and started to rather like it. There are a lot of Mexican words, but you can usually guess what they mean from the context.

The way Kingsolver reads is a fitting counterpart to the way she writes. Her use of language is uniquely fresh — never for a moment does she resort to cliché.

Today begins the year of all suffering at the School of Cretins, Deaf-Mutes, and Boys of Bad Character on Avenida Puig. The classroom is like a prison hall full of writhing convicts, its iron-barred windows set high along one wall. Small boys and monkeys for pupils. No one else there could be fourteen or anything near it, they’re the size of baboons. The Holy Virgin feels very sorry but remains outside, on her cement pedestal in the small tidy garden. She has sent her son Jesus in with the other wretches, and he can’t flee either. He is pegged to his cross on the wall, dying all the day, rolling his eyes behind the back of the Señora Bartolome, even He can’t stand the look of her clay-pipe legs and those shoes.

She teaches one subject only: “Extricta Moralidad!” The tropical climate inclines young persons of Mexican heritage to moral laxity, she says.

Señora Bartolome, perdon. We are at an elevation of 2,300 meters above sea level, so it isn’t tropical, strictly speaking. The average monthly temperature ranges from twelve to eighteen degrees Centigrade. It’s from the Geographical Atlas.

Punished for insolence. Bad Character accomplished, the first day of term. Tomorrow perhaps, Deaf-Mute. After that one could aspire to Cretin.

The Lacuna is the story of the life and times of Harrison Fletcher, who spends several periods of his early life in Mexico and later lives in the U.S. (He has a Mexican mother and a “gringo” father.) The history of the two countries in the Thirties through to the Second World War forms the backdrop of the first part of the novel. Fictionalized historic figures appear: Fletcher spends time in the household of Diego Rivera and Frida Kahlo and is a secretary to Trotsky. Even though we are reading fictionalized history, Kingsolver makes us realize how much of a lacuna — a gap, something that is missing — there is between events and the memory of them, particularly when events become history with all the filtering and shading that happens as history is written.

This novel about memory, history, American political identity, privacy, celebrity, gossip and truth, I had contemplated for decades … It is without doubt the most difficult and satisfying work I’ve done.

Parade’s End. Oh dear: I was so sure I was going to love Parade’s End. But love has not blossomed after watching the first two episodes. Probably I should watch a couple more episodes before coming to hasty conclusions. It didn’t help that the sound was somewhat murky on the recording.

It has such promise. Ford Madox Ford’s story is one of moral struggle. The adaptation is by Tom Stoppard. Benedict Cumberbatch does a fine job of stiff integrity and conservatism as John Tietjens. So far, I am finding Rebecca Hall a bit over the top in the role of his selfish and shallow wife and Adelaide Clemens just too young and naive as his platonic love interest. But I want to like it. So I will continue watching.